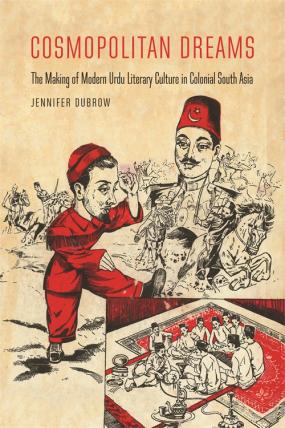 In late nineteenth-century South Asia, the arrival of print fostered a dynamic and interactive literary culture. There, within the pages of Urdu-language periodicals and newspapers, readers found a public sphere that not only catered to their interests but encouraged their reactions to featured content. Cosmopolitan Dreams brings this culture to light, showing how literature became a site in which modern daily life could be portrayed and satirized, the protocols of modernity challenged, and new futures imagined.

Drawing on never-before-translated Urdu fiction and prose and focusing on the novel and satire, Jennifer Dubrow shows that modern Urdu literature was defined by its practice of self-critique and parody. Urdu writers resisted the cultural models offered by colonialism, creating instead a global community of imagination in which literary models could freely circulate and be readapted, mixed, and drawn upon to develop alternative lines of thinking. Highlighting the participation of readers and writers from diverse social and religious backgrounds, the book reveals an Urdu cosmopolis where lively debates thrived in newspapers, literary journals, and letters to the editor, shedding fresh light on the role of readers in shaping vernacular literary culture. Arguing against current understandings of Urdu as an exclusively Muslim language, Dubrow demonstrates that in the late nineteenth century, Urdu was a cosmopolitan language spoken by a transregional, transnational community that eschewed identities of religion, caste, and class.

The Urdu cosmopolis pictured here was soon fractured by the forces of nationalism and communalism. Even so, Dubrow is able to establish the persistence of Urdu cosmopolitanism into the present and shows that Urdu’s strong tradition as a language of secular, critical modernity did not end in the late nineteenth century but continues to flourish in film, television, and on line. In lucid prose, Dubrow makes the dynamic world of colonial Urdu print culture come to life in a way that will interest scholars of modern Asian literatures, South Asian literature and history, cosmopolitanism, and the history of print culture.

Browse by fields of interest: