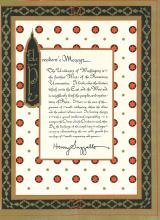 “The University of Washington is the farthest West of the American Universities.  It looks over the waters which unite the East and the West and is neighborly with the peoples and institutions of Asia.  It lies on the seam of the garment of world civilization, where the oldest and the newest cultures meet.  Its location charges it with a special intellectual responsibility–to interpret the Orient and the Occident to each other.  By the discharge of this simple duty it enlarges common understanding, the one solid ground for our hope of world cooperation and peace.”

For more information you can view the Asian Languages & Literature Fact Sheet (PDF).

History of the Department

It was renamed several times:

A Far Eastern Institute was spun off from the department in 1946 with the objective of integrating undergraduate and graduate instruction in Far Eastern studies, and established at the level of a separate college or school.  Later renamed the Far Eastern and Russian Institute, it is now the Henry M. Jackson School of International Studies and is part of the College of Arts and Sciences.

As far back as the last decade of the nineteenth century, the university offered a program of studies in “ancient languages,” in which a course of instruction in Sanskrit was offered along with those in Latin, Greek, and Hebrew.  These early Sanskrit offerings were gradually supplemented by instruction in other Asian languages: