This generous award allows one graduate student to focus on their academic research without the encumberment of teaching obligations for one year.

Nobuko is a second-year doctoral student in the Department of Asian Languages and Literature at the University of Washington, studying classical Japanese literature. She has a BA in the History and Philosophy of Science from the University of Pittsburgh, an MA in Philosophy from the University of Cincinnati, and an MA in Japanese language and literature from Portland State University. Under the supervision of Professor Paul Atkins, Nobuko is
writing a dissertation on works of poetry written in classical Chinese (kanshi漢詩) by Japanese nuns who were princesses of the imperial family in the Edo period (ca. 1600-1869).

Nobuko seeks to uncover the voices of these women, who have received little scholarly attention. These cloistered princesses were often forced to enter the convents at a very young age to live there for the rest of their lives as nuns. Collectively, they produced a large number of poems in classical Chinese on topics ranging from their laments over wasted beauty while being confined in the convent to bodily disfiguration as an expression of their devotion to Buddhism. These poems are distinctive because the women who lived in the convents wrote about their loneliness, religious devotion, and society. Nobuko is researching this important but overlooked body of poetry to uncover hidden aspects of life at the imperial convents and to investigate a new context for the literary study of poetry in Chinese by Japanese authors. This research can have a broader impact on not only premodern Japanese studies, but also fields that explore gender, Buddhism, and classical literatures of the world. 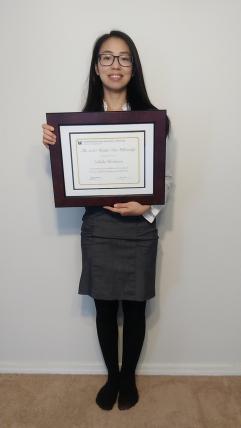 The 2019 Washin Kai - Japan Foundation Graduate Fellowship was awarded to Ross Henderson. Ross is a doctoral candidate in classical Japanese literature. He completed a BA in Japanese Studies at Earlham College, spending one year as a student at Waseda University in Tokyo. He was admitted to Phi Beta Kappa and was awarded college and departmental honors for a thesis on the mediation of modern Japanese haiku theory into English language literary discourse. Finishing his degree in 2011, the year of the Tōhoku tsunami and nuclear disaster, he spent the next two years teaching English in Iwate, one of the most heavily affected prefectures. He has served as the Blakemore Foundation intern at the Seattle Asian Art Museum. In 2017 he was awarded the MA, writing a thesis on the aesthetics of medieval excess (basara). He was the Washin Kai-Japan Foundation Graduate Fellow for the 2019-2020 term and has been awarded a Fulbright Fellowship for dissertation research at Keiō University.

Ross’ work centers on Gozan bungaku, the “Literature of the Five Mountains,” a body of work—mostly poetry, mostly in Classical Chinese—written by monks at elite, state-sponsored Rinzai Zen monasteries located in Kyoto and Kamakura. These monks travelled to China in numbers unprecedented for Japanese. There, they studied under Chinese religious masters, absorbed the latest in elite continental culture, and served in quasi-diplomatic roles, representing Japan to the Chinese court. Many, however, did not make the dangerous sea passage. Yet, though encountering China only on the written page, they nonetheless acquired a deep facility and familiarity with Chinese literary culture. Whether they travelled to China or not, these monks also produced mountains of poetry, forming tightly knit literary circles consciously modeled on the Chinese secular literati, circles which in turn were deeply connected to the highest levels of the shogunate. The focus of Ross’ Ph.D.  dissertation will be the ways in which these monks encountered China, both real and imagined, over a period of centuries, and how the Gozan vision of China influenced the subsequent development of Japanese culture.