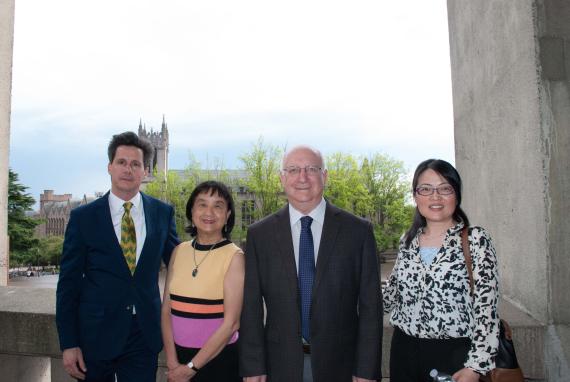 For this year's Andrew L Markus Memorial Lecture, Professor Ronald Egan, Chair of the Department of East Asian Languages and Literature and Confucius Institute Professor of Sinology at Stanford University, treated all who attended to a wonderful tour of poetry and paintings from late imperial China. His lecture, entitled "The Appropriation of Tang Poetry in Later Chinese Painting," was presented on May 8th, 2018. The event drew an attendance of over one hundred students, faculty and community members.

In his lecture, Professor Egan drew our attention to a special and often overlooked instance of inscribing poems from centuries earlier as part of the newly completed paintings of the Ming and Qing dynasties. Poetry of the Tang Dynasty, during which time, Classical Chinese poetic writing reached a pinnacle, was the most favored choice. As Professor Egan demonstrated in his presentation filled with slides of fascinating words and images, such inscription holds particular interest for what it shows about the intersection of verbal and pictorial arts as well as the aesthetic interplay of past and present. Artists of later times engage in serious personal and political dialogues with Early Medieval and Tang iconic figures such as Tao Yuanming and Du Fu and their dedication to moral ideals and dynastic fates were often moving, if not obsessive from the perspective of a modern viewer. These solemn pursuits of the art, in their paths of transmitting and transforming influences, were occasionally intercepted by unexpected and unexplained gratuitous play on the tradition.

The diversity and richness displayed and showcased in Professor Egan's lecture makes it difficult yet exciting to investigate the question that what sorts of effects the artists who inscribed famous as well as obscure poems on their paintings were trying to achieve? On some levels, their motives constituted reasonable grounds for examination with regards especially to aesthetics of the late imperial times. Professor Egan astutely pointed out that although sometimes they do seems merely random, other times these inscribed poems generate profound meaning and aesthetic affection to the painted images, which would be rendered pointless otherwise. In other words, the value of these paintings seems to depend heavily on the poetry added. Whether or not the poems were written by a contemporary or not, the painter himself or not, was moot point. What mattered was interpretation, not creativity. The hermeneutics of Classical Poetry buttressed, if not dominated, the making and receiving of the Late Imperial pictorial art, which in turn could be argued to have extended and expanded reception history of earlier poetry. As a result, the way we perceive an earlier poem may alter as a result of a later painting. In today’s digital age when “databases of poetry allows us to identify ancient poems that the painter may have deliberately left unidentified, art historians and classical literature scholars could possibly collaborate to open up new directions in which the lives of the word and the image have come to be intricately intertwined.

At the end of Egan’s lecture, he encourages scholars to cross disciplinary boundaries in order to explore the meaning of Chinese art in territories never imagined before.