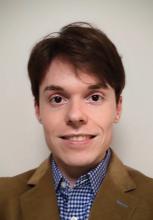 Asian Languages and Literature is proud to announce graduate student John Carlyle has won The Distinguished Thesis Award in the Humanities category. This award recognizes exceptional research and writing produced by UW master’s students in any discipline.  The 2021 competition for the award included the categories of Biological Sciences; Humanities and Fine Arts; Social Sciences; and Mathematics Physical Sciences and Engineering.

His thesis entitled, “Common Yue: A Comparative Study of Yue Dialect Phonology", discusses the Yuè dialect family as one of the major dialect families of Chinese. Yuè dialects are spoken by over 80 million people throught the Pearl River Basin in modern Guǎngdōng and Guǎngxī provinces. This thesis presents a complete reconstruction of the phonology of the ancestor of Yuè dialect family and a new classification scheme for Yuè dialects.

The reconstruction employs the comparative method and reconstructs etyma at the word level, paying careful attention to reconstruct forms that do not have standard Chinese orthography associated with them. This consideration, while uncommon in the field, is important because it allows for exploration of the early linguistic contact between Chinese-sepaking migrants and the aboriginal, non-Chinese speakers of Southern China.  The classification was determined using a computational approach. Linguistic distance was approximated by objectively measuring the average numbers of features of pronunciation that differed among dialects for common words. These differences were then plotted in a series of maps that demonstrate dialect boundaries.