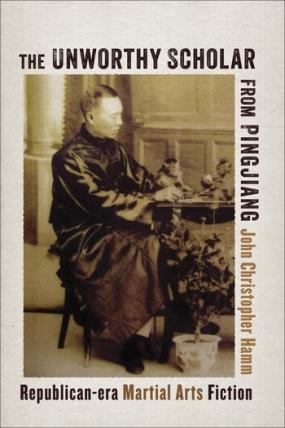 Xiang Kairan, who wrote under the pen name “The Unworthy Scholar from Pingjiang,” is remembered as the father of modern Chinese martial arts fiction, one of the most distinctive forms of twentieth-century Chinese culture and the inspiration for China’s globally popular martial arts cinema. In this book, John Christopher Hamm shows how Xiang Kairan’s work and career offer a new lens on the transformations of fiction and popular culture in early twentieth-century China.

The Unworthy Scholar from Pingjiang situates Xiang Kairan’s career in the larger contexts of Republican-era China’s publishing industry, literary debates, and political and social history. Writing at a time when writers associated with the New Culture movement promoted an aggressively modernizing vision of literature, Xiang Kairan consciously cultivated his debt to homegrown narrative traditions. Through careful readings of Xiang Kairan’s work, Hamm demonstrates that his writings, far from being the formally fossilized and ideologically regressive relics their critics denounced, represent a creative engagement with contemporary social and political currents and the demands and possibilities of an emerging cultural marketplace. Hamm takes martial arts fiction beyond the confines of genre studies to situate it within a broader reexamination of Chinese literary modernity. The first monograph on Xiang Kairan’s fiction in any language, The Unworthy Scholar from Pingjiang rewrites the history of early-twentieth-century Chinese literature from the standpoints of genre fiction and commercial publishing.

A review of The Unworthy Scholar from Pingjiang can be found from The Ohio State University's Modern Chinese Literature and Culture Resource Center here: https://u.osu.edu/mclc/book-reviews/altenburger/

You can purchase the book from Columbia University Press here.