Memory Construction and Emotion in India, Past and Present 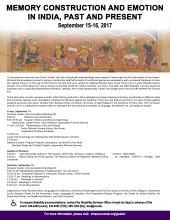 On September 15-6, Prof. Heidi Pauwels organized an international symposium on “Memory Construction and Emotion in India, Past and Present,” as part of an ongoing interdisciplinary effort to understand how Hindu, Muslim, and Jain cultural self-understandings were shaped in India’s past and how that relates to the present. An international team of scholars presented their work on the processes involved in memory construction and the formation of emotional regimes as expressed in early vernacular literatures in India. Special focus was on contextualizing the use of Old Hindi for the first time as a vehicle for retelling the Sanskrit epics at the Tomar court in early fifteenth-century Gwalior.

The symposium built on Prof. Pauwels’ research collaboration with the team of Prof. Eva De Clercq at the University of Gent, Belgium, and was joined by Prof. Françoise Nalini Delvoye from Paris and Profs. Raj and Archana Kumar from Benares Hindu University in India. Several UW students participated, including Corbett Costello and Chris Diamond of Asian L&L. UW Profs. Salomon, Dhavan and Novetzke acted as respondents. There was an outreach component at the Seattle Asian Art Museum in the form of a lecture-demonstration on Kalbeliya “Gypsy” dance, and a collective reading session at the Simpson Center. The symposium was generously funded by the Simpson Center, the South Asia Center, the Global Studies Center, Asian Languages and Literature, the Comparative Religion Program and the Seattle Art Museum.