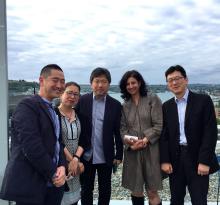 On May 18, critically acclaimed film director Hirokazu Koreeda and Davinder Bhowmik, professor of Japanese literature, spoke before an audience of nearly 100 in the Walker-Ames Room about the director’s prior films and the US debut of his film, “After the Storm,” screened to capacity crowds in the 2017 Seattle International Film Festival.

Koreeda, who had originally planned to become a novelist, began his career as an assistant director of television documentaries. He eventually went on to direct feature films in which his penchant for documentary style is evident.  Known for films such as “Like Father, Like Son,” “Maborosi,” and “After Life,” Koreeda now manages his own production company, Bun-Buku.  He also teaches film at Waseda University.

Koreeda spoke for nearly an hour with Professor Bhowmik who had prepared a series of film clips from her film course on Koreeda’s works to provide a context for her questions.  The director then took audience questions for half an hour with the assistance of a skilled interpreter, Ms. Kasumi Yamashita.

“My interest in Koreeda-san’s work lies in his documentary style and the blurring of documentary and feature.  This stems from my primary field of Japanese literature in which the line between fiction and nonfiction is not so clear,” Bhowmik said.

One of the questions Bhowmik asked Koreeda involved the repeated sounds of chimes and bells in his films. She wondered how he managed to activate the viewer’s senses using visuals and sounds in his filmography.

“I use wind chimes to depict the intangible,” Koreeda said. “They are a good way to depict things that aren’t there.”

Koreeda’s films work with the intangible, and center on existential questions and emotional relationships between people. The director explained how he often used everyday kitchen scenes with the sounds of knives hitting chopping boards and crackling oil to evoke a strong sense of smell and taste and which, he added, anyone can imagine.

Koreeda recalled the creative process behind “After Life,” and how he used this process to connect his audiences to the history of Japan. “After Life” is a film in which people experience “heaven” after dying by reliving a happy memory they select to take with them for eternity. Actors and non-actors appear in the film “We interviewed 600 elderly people in Japan,” Koreeda said. “If they could bring one memory with them to the afterlife, what would it be?”

Koreeda also addressed the relationships between children and their non-biological parents in his films, particularly moments of connection between mothers and daughters. In several of his films, a mother or maternal figure brushes the hair of a young girl. “I like hair brushing scenes because they give me the rare opportunity for actors to speak to each other while facing the same direction.”

After the conversation ended, Koreeda thanked the audience and left the stage. He stayed in the room, patiently answering more questions and smiling for countless pictures.  At 9 am the next morning, in a repeat performance, Koreeda joined Professor Bhowmik’s film class.  “I had planned to give Koreeda-san a tour of campus and take him to lunch after class but students were so enamored by the director they wouldn’t let us leave the classroom!”