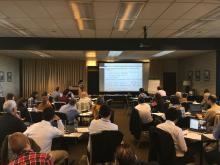 The Fourth Workshop on Sino-Tibetan Languages of Southwest China (STLS-2016) was held on the campus of the University of Washington, September 8-10, 2016. The event was organized by Prof. Zev Handel. The workshop, held every two or three years, is a forum for linguists and anthropologists to present their most recent data and analyses on Chinese minority languages spoken in Sichuan province and surrounding areas of Southwest China. Many of these languages have been under-studied and poorly described, and some are critically endangered. Only in recent decades have they begun to receive the attention they deserve. Scholars from around the world, representing over 20 universities, made 29 oral presentations. The nine countries represented by the participating scholars were China, Japan, Taiwan, Finland, Norway, France, The Netherlands, Australia, and the United States. Among the languages that were discussed at the conference were Qiang, Japhug, Horpa, Stau, Lalo, Duoxu, Lisu, Lahu, Guiqiong, Menya, and Khroskyabs. These languages are all distantly related to Chinese (and somewhat less distantly to Tibetan). The presentation that generated the most excitement was a report on a previously unknown language, tentatively designated mBo, spoken by about 3,000 people in a remote valley in mountains of Tibet. The preliminary analysis of this language suggests that it may upend some of our current notions about the history of language development and of population movements in the region.

Each day of the three-day conference began with an invited keynote presentation. The three keynote speakers were Prof. Scott DeLancey of the University of Oregon, Prof. Lin You-Jing 林幼菁 of Peking University, and Prof. Shi Xiangdong 施向东 of Nankai University. Seven of the presenters were graduate students, helping to ensure that work on these important languages will continue with the next generation of scholars. A total of 46 people registered for the workshop, including members of the UW faculty, students, and the surrounding community. We were blessed with gorgeous September weather, favoring a picnic lunch on the quad and providing spectacular views of Mt. Rainier. All participants declared the workshop to be an enlightening and valuable exchange of ideas, data, and analyses, which will have a positive impact on the study of these fascinating languages for many years to come.

At the end of the workshop, Prof. Shi Xiangdong announced that Nankai University would host the 5th workshop in 2019.

The workshop was made possible through the generous support of sponsoring institutions and units. The Chiang Ching-Kuo Foundation provided the bulk of the funding to pay for the venue. The University of Washington’s China Program, East Asia Center, Department of Linguistics, and Department of Asian Languages & Literature provided crucial support. The Confucius Institute of the State of Washington generously funded the transportation and lodging of the two invited speakers from China. The assistance of two graduate students from AL&L (Virginia Williams and Jennifer Luo) and two graduate students from Linguistics (Sarala Puthuval and Nathan Loggins) was invaluable to the smooth and successful completion of the workshop.

For more information on the workshop, see http://blogs.uw.edu/stls2016.