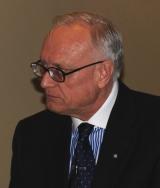 Professor Emeritus David R. Knechtges was honored by the Chinese government last month in the Great Hall of the People in Beijing with the Eighth China Book Award for his extensive contributions to Chinese literary scholarship.

Q: You have won the 8th China Book Award for Special Contributions for your translation of the History of Chinese Civilization, how did the project start?

A: The History of Chinese Civilization is a four-volume history of China from earliest times to 1912. It was written by thirty-six scholars from Peking University and published by Peking University Press in 2006. When I visited Beijing in 2005, Professor Yuan Xingpei invited me to Peking University to meet with some of the scholars to discuss the possibility of translating this work into English. Through the assistance of my wife Taiping Chang, we were able to recruit a group of translators, most of whom were my current or former students, to prepare draft translations. At that time, we did not have a publisher. Fortunately, Stephen Bourne, the CEO of Cambridge University Press, heard about the project and encouraged his editors to agree to publish our translation. I remember going to Peking in 2010 to meet with Stephen Bourne and some of my colleagues at Peking University. It was a great relief that I did not have to undertake the task of convincing a scholarly press to publish this work.

Q: How many years did the project take? What were some of the challenges of this project? How would you describe the translation process?

A: The translation of a few selected chapters began in 2007. However, most of the work was done in the period of 2010 to 2012. During this time, some of the chapters were submitted to the authors in Beijing for review and comment. My task was to prepare the final English version. I devoted all of my free time during a two-year period to this task, which involved in some cases rewriting almost every word of a goodly number of chapters. There were several challenges. The first was to reproduce the Chinese original as faithfully as possible while making the text intelligible to an English speaking reader. It some cases I had to reword or even delete passages that were awkward or inappropriate in English. Another challenge was the translation of long quotations from pre-modern Chinese works, many of which had never been rendered into English before. The process of translating them involved much research on my part, and I learned a great deal about subjects that were new to me, especially in the fields of science and technology.

Q: What is your principle of translation?

A: As I mentioned previously, I attempted to produce a translation that was accurate yet readable. One of my basic principles of translation is to sacrifice readability to accuracy. I am known for translations that use unusual English expressions that sometimes send readers to the Oxford English Dictionary. However, I had to deviate from my principle at times in the History of Chinese Civilization.Some of the authors’ Chinese writing is quite convoluted and does not easily flow into a smooth English style. Thus, I had to do some extensive rewording and even paraphrase some portions of the work. I was helped in this task by a senior editor at Cambridge Press who has a superb ear for English style.

Q: How does this project compare to your famous Wen xuan translation published by Princeton University in three volumes?

A: This work is quite different from my Wen xuan translation. The Wen xuan translation is a lifetime project that I began over forty years ago. It is also a philological, scholarly work in which I provide detailed annotations for almost every line of the text. And it is uncompromising. If the Chinese text has a word in Chinese that may sound strange to a non-Chinese reader, I do not dumb it down by providing a misleading English equivalent as some translators of Chinese literature do. For example, a famous translator rendered a line by the Tang poet Du Fu as “Another maid he took to wife, /Sweet as a lily or a rose.” The proper and accurate version should read: “His new wife is as beautiful as jade.”

Q: What was the award ceremony in the People’s Hall like?

A:   The ceremony was quite tiring. It included a full day of activities. They began with a press conference at eleven followed by a banquet from 12:30 to 2:00. At 2:30 we went to the Great Hall of the People for the award ceremony. We first had a rehearsal for the award ceremony. We then had a meeting with what they call "Chinese State Leaders." This was followed by the ceremony in which the awards were given out. It turns out that I was selected as the principal speaker for the press conference, the meeting with the leaders, and the award ceremony. Thus, I was not able to relax the whole day. 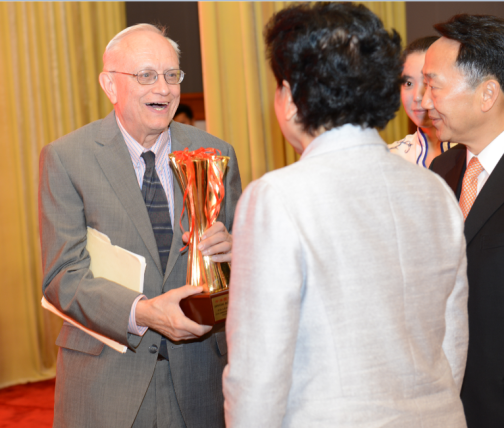 Q: What was it like to be received by Liu Yandong, the Vice Premier of China, eldest member of the Politburo of the Communist Party of China, and the highest-ranked female politician in the Party?

A: I have met a number of high-ranking Chinese officials before, and many of them are not all that scholarly or intellectual. I found Vice Premier Liu well informed about scholarly matters. She also was friendly and easy to talk to.

Q: What is your current or next big translation project?

A: Now that I am retired, I am already back at work on the Wen xuan translation project. I have three volumes to finish before I no longer have the vigor and energy to do this kind of work.