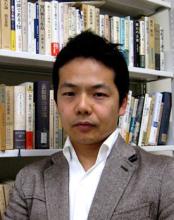 This year's visiting scholar from Japan challenges the notion that a national literature must reside within geographical borders. "To think about Japanese American literature is to think about modern Japanese literature," argues Prof. Yoshitaka Hibi, a modern Japanese literature professor at Nagoya University. For the Spring 2009 quarter, he and Ted Mack, professor of modern Japanese literature, led a research seminar that focused on the literary culture of Seattle's Japanese immigrant community. The seminar "Japanese-Language Texts at Seattle's Nihongo Gakkô" gave graduate students the opportunity to gain hands-on experience in researching the flow of texts within a community. Seminars were typically conducted in the archive of the Japanese Language School, where students conducted an inventory of Japanese-language texts held there and attempted to track the routes those texts traveled to get there. Hibi notes his surprise that the books had come from multiple libraries, some now defunct. In particular, he points to one volume that appears to have journeyed from a local library of the Japanese American community in Seattle to the Minidoka concentration camp to the Seattle Public Library only to find its current home at JLS.

Hibi's visit to the UW campus is part of a larger project concerning the literary history of Japanese American literature until 1945. Seattle is his third stop after San Francisco and Los Angeles. His interest in Japanese American literature originated in his doctoral study of the depiction of the self in the Japanese modern novel. As part of this study, he examined Amerika Monogatari by Nagai Kafu, one of the standard bearers of early modern Japanese literature. At the time Nagai wrote the novel, Hibi notes, the author was living in the United States and was not certain he would return to Japan. Thus at the time of the novel's publication, he was a Japanese immigrant making his way in his new home country. Nevertheless, the novel is considered a staple of Japanese literature. This paradox inspired his current research.