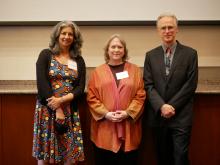 At the 2022 Andrew L. Markus Memorial Lecture held on May 9, Sharalyn Orbaugh, professor of Japanese literature and popular culture and Head of Asian Studies at the University of British Columbia, argued that love, rather than hate or violence, performs the political work of Japan’s wartime propaganda as expressed through kamishibai (paper theater). Orbaugh began her talk entitled “Japanese Propaganda and the Power of Love: Mobilizing the Wartime Empire” by immersing the audience into an absorbing narration and colorful visuals of “The Unsung Mother” a 1944 play in which a self-sacrificing mother’s love for her soldier-son is reciprocated by the son’s gratitude for his mother’s devotion. The affective power of this mother’s love and guilt (môshiwakenai) dominates the play in which hatred of American and British soldiers is depicted only in its flimsy frame.

In addition to “The Unsung Mother” Professor Orbaugh gave numerous other examples that center on intense love depicted on a small scale out of a corpus of 200 wartime plays she has studied. She explained that the Japanese government created plays featuring small, local stories of love in order to mobilize soldiers and to inspire patriotism among the masses. Orbaugh emphasized that while it is impossible to gauge how effective propaganda is or to know what specifically arouses viewers’ emotions, the plays “created a sense that 100 million Japanese and Japan’s colonial subjects were united in feeling, affectively bound into one homogenous community.” The final section of the talk, which focused on plays performed in the colonies, showed a blurring of the figures of colonized and colonizer. At first glance this seemed to suggest Japan’s empire was inclusive, as the government stressed; however, in one of her concluding points Orbaugh pointed out how colorism undercut the idea of belonging to the nation.

On the second day of her visit, Orbaugh conducted a graduate seminar on methodological and epistemological questions in the study of popular culture. The seminar offered graduate students to engage directly with a scholar widely published in both literature of the Asia-Pacific War and popular culture.  Discussion ranged broadly from topics of pedagogy to changes in terminology over time and space. Orbaugh’s passion for mentoring clearly showed in her thorough engagement with each student present and in their particular research interests. 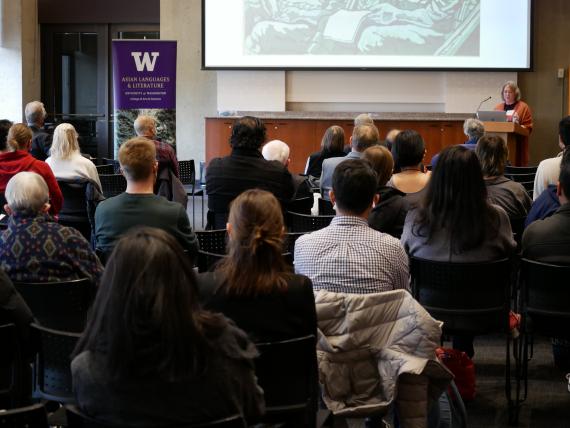 Orbaugh is the author of numerous books and articles including, Propaganda Performed: Kamishibai in Japan’s Fifteen Year War (2015), Japanese Fiction of the Allied Occupation: Vision, Embodiment, Identity (2007), “Compulsorily Queer: Coercion as a Political Tool in Queer Manga” (2018), and “Emotional Infectivity: The Japanese Cyborg and the Limits of the Human” (2008). She is currently putting the finishing touches on the Columbia Companion to Modern Japanese Literature (2022) for which she is sole editor.

Please visit our Andrew L. Markus Memorial Lecture page for information on Professor Markus and the event, including a list of past lectures.

(Please note: This event was recorded and will be shared once the editing of the video is complete.)