The 2018 Graduation and Awards Ceremony 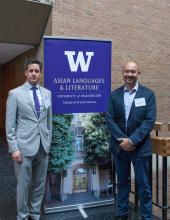 The 2018 annual convocation and awards ceremony marked the passing of another successful year for the department. Featured front and center were the accomplishments of our graduating students. The Department conferred a total of 71 Bachelor of Arts degrees this year: 14 in Chinese, 37 in Japanese, 7 in Korean, 2 in South Asian Languages and Literature, and 11 in the Asian Languages and Culture major, brand new in spring quarter 2018.

Headlining the event was the keynote address from Mr. Eugene Saburi, an experienced global IT executive who most recently served as president of Adobe Japan. Mr. Saburi has also served as Board Member of the UW Alumni Association in Japan, and graduated from the Asian Languages and Literature Department in 1993. Mr. Saburi’s enthusiastic and heartfelt speech detailed his varied career path, and encouraged students to never be afraid to take chances. As he told the graduates with a final joke, “Your future’s so bright, you gotta wear shades!”

Congratulations to all of our graduates and award recipients!  For photos from the ceremony and reception, please visit our department Flickr page.