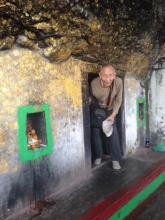 Geshe Nawang L. Nornang (Nor nang Ngag dbang blo mthun) was born on 9 December, 1924, the wood-rat year, to Rdo rje rgyal po and Dbyangs can of the aristocratic Nor nang family, the sixth of their nine children, at a time when his father was commissioner of Sku rnam Rdzong in Dwags po.

In 1933, Geshela entered the G.yul sgang private school in Lhasa where he studied reading and writing until 1937. Thereafter he spent a year under the tutelage of his maternal uncle, Thub bstan kun mkhyen, one of the chief secretaries (drung yig che mo) of the Ecclesiastic Office (Yig tshang).

In 1938, he took his novice  vows in the presence of the Stag brag Regent, and he was enrolled in Dwags po Bshad sgrub rnam rgyal ba’i gling, a monastery noted for its strict devotion to scholarship and discipline. There he was tutored by Dge bshes Blo bzang dbyigs bsnyen in logic, philosophy and ritual, following a standard Dge-lugs-pa curriculum which included the Abhisamayālaṃkāra and other Prajñāpāramitā works,  the Abhidharmakośa and its commentaries, the Madhyamakāvatāra and the major works of Tsong kha pa on Madhyamaka, works by the 19thgdan rab of Dwags po, Rje byams pa chos mchog and on logic by Phur bu lcog yongs ‘dzin. As a chos mdzad, a monk whose family makes a substantial contribution to the monastery and is thereby excused from the obligatory labor of a young monk, he was also allowed to visit his family in Lhasa for three months a year.

In 1946, Geshela took his vows as fully ordained monk and served as a tutor at Bshad sgrub gling. In 1948, he served for two years as monastic treasurer (phyag mdzod). In 1950, monastic stores were almost depleted due to the over-enrolment of monks, and the monastery petitioned the government for a permit to solicit funds and supplies.  Geshela was in charge of this mission and travelled extensively throughout Central Tibet in order to do so. He also visited India twice on wool-trading trips in 1953 and 1956, when he also completed the pilgrimage at Bodh Gaya during the 2500th anniversary of the parinirvāṇa of the Buddha. He also continued his studies toward the geshe degree which he completed just before the 1959 revolt in Tibet. Unfortunately the political turmoil of that year prevented the formal conferral of the degree.

From 1954 on, as the representative for his monastery, he also went annually to Lhasa for the “Great Prayer Festival” (Smon lam chen mo), when the government would honor a request to supply monasteries with fiscal help.

At the time of the revolt in 1959, he was in Lhasa for the Great Prayer Festival. After the Dalai Lama fled, he returned to his monastery, but Chinese military movements in the area forced him to flee south through E, Gnyal, Bya yul, Klo yul and the Northeast Frontier Area of India. After two months at Misamari refugee camp he took up residence in Kalimpong with relatives and lived there until 1960, when he and his niece, Lhadon Karsip (Rnam rgyal lha sgron Skyar srib), were brought to the University of Washington by Professor Turrell V. Wylie as Tibetan language instructors in the University’s newly-established Tibet Studies Program, the first of its kind in the United States.

At this time, the Far Eastern Languages Department at the University of Washington had also contracted with the US Office of Education under the National Defense Education Act to produce the first systematic study and teaching materials of the Lhasa dialect of Tibetan. His work with the linguists Chang Kun and Betty Shefts Chang over the next three years resulted in their Manual of Spoken Tibetan (Seattle: University of Washington Press, 1964), as well as material that Chang & Shefts published later (Spoken Tibetan Texts, Taipei:Institute of History and Philology, Academia Sinica, 1978-1980). After the NDEA contract expired in 1963, Geshela was hired by the Department of Asian Languages and Literature as Tibetan language instructor, where he remained until his retirement in 1985.

During this time he also coauthored with Melvyn C. Goldstein Modern Spoken Tibetan: Lhasa Dialect (Seattle: University of Washington Press, 1970). It would be no exaggeration to say that, through these works, particularly the latter, Geshela became the primary teacher of Lhasa Tibetan to a generation of scholars. In addition to his language teaching duties, Geshela worked tirelessly for his students and colleagues at the University of Washington, giving generously of his time and knowledge to help students and scholars with their projects, whether they involved translations from Tibetan, questions in Buddhist philosophy or other social and cultural subjects. His influence and assistance, acknowledged or otherwise, is found in many works of students who passed through the Tibetan program at the University of Washington and elsewhere for more than a quarter of a century and even well beyond the time he retired. He was always available to help many new Tibetans settle in when they came to live in the Seattle area, and he volunteered to teach Tibetan to Tibetan children for more than twelve years.

Geshela passed away after completing his second Bodh Gaya pilgrimage in India at the age of 89, on Saturday, October 18, 2014. He leaves behind a vast number of students and friends who were privileged to know him.