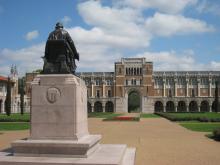 We are recruiting 2-3 intern students at University of Washington to assistant our researchers to digitize advertisements of Da Gong Bao from microfilms preserved at UW library.

Ta Kung Pao (大公报, also as Da Gong Bao), founded by Chinese citizen Ying Lianzhi, in Tianjin in 1902, was a stronghold for Chinese journalists trained at the University of Missouri, School of Journalism in Columbia, Missouri. The Tianjin newspaper was one of the earliest and most influential newspapers in North China because, as a commercial newspaper DGB published trade data, information and theoretical writing about economic activities and new profit seeking methods. It even published theoretical work on what a commodity is and how surplus value is generated.

This digitization project is part of the Ephemera Project, a four-year project directed by Tani Barlow with the generous support of the Luce Foundation, the Chao Center for Asian Studies of Rice University and Rice University. The Ephemera Project pursues to launch the first scholarly project in the nation devoted to collecting, archiving, sharing, and analyzing Asian commercial ephemera.

Working with our researchers, undergraduate and graduate students will have a chance to access the Chinese advertisement starting in the late 19th century and continuing into the contemporary era and get basic knowledge of digital archive, which has been the most important way of preserving visual objects in the new media age. We also welcome our interns to work with us on image annotation, data analysis and application of GIS to the commercial marketing map in Modern China.