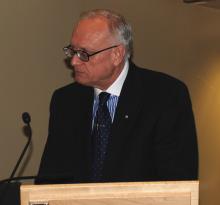 This spring, David R. Knechtges, professor of Chinese, delivered the Solomon Katz Distinguished Lecture in the Humanities. The selection of Knechtges as Katz Lecturer was in recognition of his exceptional accomplishments over four decades in the study of classical Chinese poetry. Knechtges, who received his undergraduate and master's degrees from the University, has published more than a hundred articles and nine books on Chinese literature and culture.

Knechtges’ lecture, entitled “How to View a Mountain in Medieval China” was delivered to a rapt audience in Kane Hall on April 28 . For his subject, Knechtges chose to examine the lyrical treatment of mountains in the poetry of Xie Lingyun (385—433 CE). Knechtges discussed the importance attributed to mountains for spiritual development in both European and Chinese literature.

The Katz Lecture series is the University of Washington's most distinguished event in the humanities. Over the years, some of the world’s most honored scholars have delivered Katz lectures. Recent speakers include such internationally renowned scholars as Helen Vendler, Romila Thapar, and Alexander Nehamas. Previous lecturers from AL&L were Roy Andrew Miller and Richard Salomon.

To see or hear this lecture in downloadable MP3 format, visit:
http://depts.washington.edu/uwch/katz/20082009/david_knechtges.html