Sundanese Music and Dance of Indonesia

Sundanese Music and Dance of Indonesia

UW School of Music Visiting Artist Ade Suparman, an instrumentalist and composer from West Java, Indonesia will perform with his students in this concert of Sundanese music.

The concert will be accompanied by Sundanese contemporary and classical dance, Jaipongan and Ketuk Tilu folk style dances performed by Nurrika, a Sundanese choreographer, and students at the University of Washington. 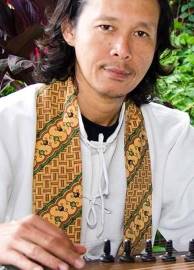 ADE SUPARMAN --- Ade Suparman, instrumentalist and composer of Sundanese music, was born in Purwakarta, West Java, in 1969. He started playing kacapi when he was 10 years old with his father. He then studied music theory and classical music (including vocal, Suling, Kendang and Gamelan) at Indonesia Art School (SMKI). He received his BA from Indonesian Art University (ISI) in Surakarta.

After his studies, he performed as a concert kacapist around the world. Besides performing, he has created a new learning method for Suling (bamboo flute), and has also published several method books for Sundanese instruments - Suling, Gamelan and Kacapi.

Ade has been a member of professional folk and classical music groups in Bandung, performing on Kacapi and Gamelan. He has recorded Sundanese traditional and contemporary music with well-known composers in West Java.
His travels abroad have taken him to India, South Korea, the Netherlands and the USA. While in the Netherlands, he performed as a kacapi soloist in Utretcht and Den Haag, and also taught Sundanese music in Stichtings Kunskring Siliwangi-Panglipur. He also teaches regularly in Bali for the San Diego-based Center for World Music. 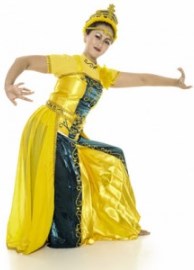 NURRIKA --- Nurrika, who goes by a single name, is married to the musician, Ade Suparman. They have three sons (Bayu, Aditya and Chandra) and live in Bandung, West Java. She was born in Bandung, graduated in traditional dance performance from SMKI, and attended STSI in Bandung. She appeared in a video in 2001-2003 with the famous Malaysian dancer, Asraf.

Specializing in jaipongan style dance, which combines gestures and movements from folk dance with the pencak silat martial art, Nurrika performs widely throughout Sunda. In 2006 she also taught and performed in the US. She currently teaches dance at SMP Pasundan 6 High School in Bandung. Her repertoire includes jaipongan and folk style dances, as well as Sundanese classical dance.

Since 2004, Nurrika has taught dance at the San Diego-based Center for World Music workshops in Bali, and has performed in the Payangan Festival of World Music for several years. Nurrika is also a gifted choreographer of new dances. “Babalen” is a recent example, which combines her Sundanese traditions with the Balinese and Western styles which she has experienced through international travel.