2016 Markus Lecture: A Clouded Mirror: The Uttarakāṇḍa of the Vālmīkirāmāyaṇa as an Occluded Guide to Statecraft 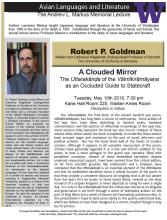 Robert P. Goldman, the William and Catherine Magistretti Distinguished Professor of Sanskrit at the University of California, Berkeley, will deliver the 2016 Andrew L. Markus Memorial Lecture.

The title of Dr. Goldman's talk is, "A Clouded Mirror: The Uttarakāṇḍa of the Vālmīkirāmāyaṇa as an Occluded Guide to Statecraft"; and the event will be held in Kane Hall 225, the Walker-Ames Room, on Tuesday, May 10th, @ 7:30pm.  A reception will follow.

From Dr. Goldman's abstract for "A Clouded Mirror":

"The Uttarakāṇḍa, the final book of the ancient Sanskrit epic poem, Vālmīkirāmāyaṇa, has long been a source of controversy.  Some actions of the epic hero have been disturbing to Sanskrit poets, medieval commentators and the authors of influential re-workings of the epic tale. Some versions fully represent the book but also mount critiques of these actions while others excise the book completely. In modernity these actions have aroused anger and resistance on the part of social reformers and political activists.  Nor has the book fared well at the hands of modern scholars. Although it appears in all complete manuscripts of the poem, scholars have generally regarded it as a late and inferior addition to the poem, at best a mere epilogue to the grand epic narrative filled with peripheral narratives. Several of these embedded narratives, despite universal manuscript support, have been excised from the critical edition, on far from scientific grounds. My collaborator and I, however, have concluded that the Uttarakāṇḍa is an essential element of the Rāmāyaṇa and that its embedded narratives serve a critical function of the poem in that they provide a consistent discourse on kingship that is all but absent from the epic’s first six books. In those books Rāma, revered as the ideal monarch of a utopian kingdom, is never depicted as ruling for even a single day.  It is only in the Uttarakāṇḍa that the critical epic discourse on kingship and governance is set forth through a series of exemplary actions on the part of King Rāma and a series of bizarre but fascinating cautionary tales. In this presentation I hope to lend some clarity to this poorly understood text, which we believe to have been designed as a mirror, clouded though it may be, for princes."

Dr. Robert Goldman is the William and Catherine Magistretti Distinguished Professor of Sanskrit at the University of California at Berkeley. He is the General Editor and a principal translator of the Vālmīki Rāmāyaṇa Translation Project, a consortial project to provide a scholarly translation of the poem’s Critical Edition as prepared by scholars of the Oriental Institute of Baroda. The seventh and final volume of the translation, the Uttarakāṇḍa, will appear in print in the summer of 2016.  Professor Goldman’s major areas of interest are the Sanskrit language, Indian epic and literary studies and Indian cultural history. He is the author of Gods, Priests and Warriors: the Bhṛgus of the Mahābhārata and dozens of scholarly articles, reviews and encyclopedia entries. He is also the co-author with Sally J. Sutherland Goldman of the Devavāṇīpraveśikā: An Introduction to the Sanskrit Language. He has been the recipient of a number of awards and honours including a Guggenheim Memorial Fellowship, election as a Fellow of the American Academy of Arts and Sciences and the title of Vidyāvāridhi awarded by the Mandākinī Saṃskṛta Pariṣad. He was the recipient of the Certificate of Honour for Sanskrit (International) awarded by His Excellency the President of India in 2013.